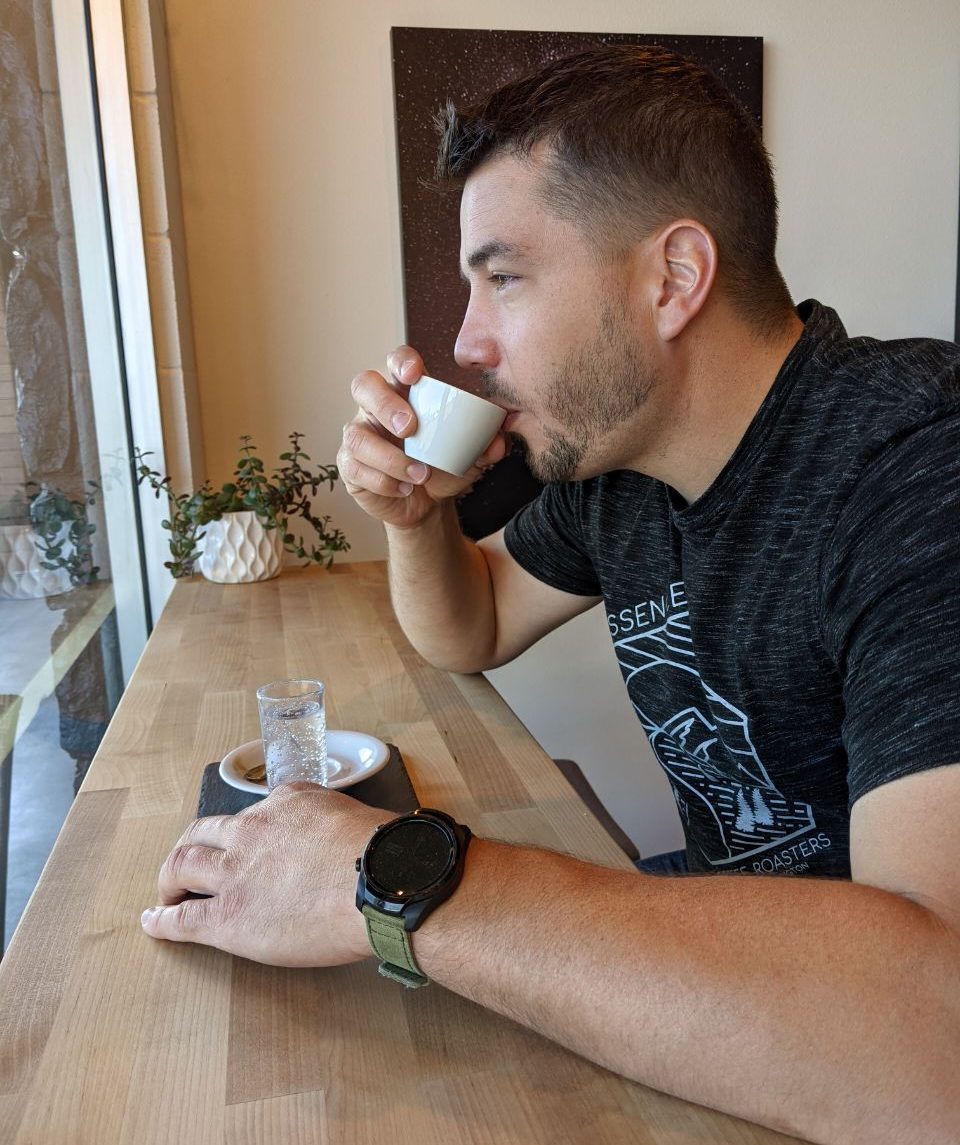 Essence Coffee Roasters is the culmination of a nearly lifelong dream. As a child, it was customary to have a cup of coffee before heading off for grade school. Mom would have a mug of coffee waiting for me at the breakfast table. It was nothing special, I’m sure it was just Folgers or some other grocery store brand. She would add milk and sugar to it, and it was something I looked forward to in the mornings.

As I grew older, grocery store coffee no longer was doing the trick, and milk and sugar were no longer a part of my daily coffee. I was drinking coffee black, and looking for a better tasting cup of coffee. In rural South Dakota, coffee roasters weren’t on every street corner. Our local town had a population of 266 people. Our closest town for groceries and household necessities was a 30-minute drive away. For any real options, our town was Sioux Falls. This was nearly 2 hours away from us, but we made it there at least once a month.

I began buying coffee from a roastery called Great Plains Coffee Company in the Sioux Empire Mall, in Sioux Falls, South Dakota. It was a great place! They roasted coffee right there in the mall and had displays of bulk coffee beans lining the walls. You could go in, inspect the options, consult the staff, and try many of the different coffees available. After making your selection, the cashier would bag it for you right there while you waited. It was amazing! I had never experienced coffee like this! My recollection of the coffee from Great Plains is that it was a solid medium roast coffee. It was full of flavor, well balanced, and with a good bit of nuance. I believe it was sometime around 2007 when they closed shop in the mall, much to my dismay! It wasn’t long until I found out that they were relocating to a building of their own, a few blocks away.

While Great Plains Coffee was getting ready to reopen, they underwent a rebranding, and changed their business model as well. When they reopened, it was as Coffea Roasterie. New brewing methods, new bag designs, a nice seating area with tables and chairs, and most importantly, a new roast profile! Gone was the solid medium roast coffee, they were jumping into the light roast spectrum!

The first cup of coffee I had from them I did not particularly enjoy, to be truthful. I found it to be too acidic, and just completely different from the Great Plains Coffee experience I was so looking forward to. However, they were our only real coffee shop, and I kept going. It was probably my third or fourth visit since they reopened that I remember thinking, “Wow, this coffee is really, really good!”. My interest was piqued.

Throughout the next few months, I would get different coffees from them, exploring the different origins, asking questions, and learning. I was amazed at the distinct differences in flavor profiles from one origin of coffee to the next. It didn’t take long, and I had made up my mind to someday work in a coffee shop. I purchased a little home espresso machine and started making espressos and lattes at home. At first, it was just for me, but soon, friends started coming over in the evenings and we would hang out and drink coffee.

I went deeper and deeper down the rabbit hole. Soon, I upgraded my espresso machine, this time to a little more expensive home machine. It was still on the cheaper end of the spectrum, if memory serves, I spent around $500 on it. Then came the grinder upgrade. Another $500. Then I retrofitted my espresso machine with a dimmer switch from a tractor, so I could control the grouphead pressure. A new over pressure valve was installed, further refining the control I had. I began to seriously geek out over pulling the best possible espresso.

It was around this time that I met Megan. A year or so later, and we were married. I was preoccupied with simply making a living, and the coffee dream was on the back burner. It would frequently get talked about, but it was always a “someday” type of goal. We enjoyed exploring different cities and finding new coffee shops together, all in the name of “research”. At one point, we decided we were spending so much money on coffee, and money was so tight, that we gave up drinking coffee altogether! I tried grocery store coffee again, and it just didn’t do the trick, so we simply quit drinking coffee at our house. Fortunately, this only lasted a month or two, and it was a happy day when another shipment of coffee arrived on our doorstep. The coffee shop dream was rekindled, and we plunged right back into finding new shops, new coffees, and learning as much as we could.

At this point, my dream was undergoing several metamorphoses. I was no longer content with the idea of working in a coffee shop, I now wanted to own one. We visited a good friend in Ronan, Montana, at Dobson Creek Coffee and had the privilege of “roasting” my first batch of coffee ever. Truth be told, Trent did most of the roasting, while I simply observed. I was hooked. I now was determined to not only own my own shop, but also to roast our own coffee.

Upon arriving home, I set about researching home coffee roasting. I purchased some green coffee from Sweet Maria’s and repurposed a stove-top popcorn popper for my experiments. My very first roast was done indoors, with no idea of what to expect, and I set off every smoke alarm in the house and filled the house with smoke. Needless to say, future experiments were conducted in the garage with the doors open! Try as I might, I couldn’t roast any coffee that I was truly happy with. I gave up on this method of roasting but resolved to purchase a real roaster just as soon as possible.

In the winter of 2015, we were able to get a loan for some coffee equipment. To start with, we ordered a brand new Giesen W6A coffee roaster, purchased a new Slayer Espresso single group espresso machine, and a Compak E8 coffee grinder. My parents were in Mozambique as missionaries for 5 years, so we were renting their house at that time. We renovated the garage for them, building out a small room to house the coffee roaster and some green coffee. Then, we waited for the coffee roaster to arrive.

Giesen coffee roasters are built to order in the Netherlands and shipped via container ship to the US. It took a few months, but finally, in the middle of April 2016, our brand-new roaster arrived! After installing the roaster, I began to experiment with roasting coffee. Many phone conversations took place between Andrew Fritz and I, who was the head roaster for Coffea Roasterie at that time. We became good friends, and he helped me immensely with figuring out how to roast coffee. He is currently the head roaster at Proud Mary in Portland, Oregon.

We began setting up at a local Farmers Market and selling our bags of coffee. Sales were fairly slow, but we sold enough to keep trying! Fast forward a couple of years, and I was improving as a roaster. I still didn’t really feel like I knew what I was doing, but our quality was definitely trending upward. We moved to a small house in Iroquois, SD, population 266 people, in the summer of 2018. We converted a garage bay into a roasting room and coffee bar. We were open to the public every Saturday morning from 8am-12pm. We had a lot of good feedback and enjoyed the connections we made with all the neighbors and the locals in that community.

In May of 2019, we entered a regional roasting competition in Sioux Falls. There was a number of roasters there from North Dakota, South Dakota, Minnesota, Iowa, Nebraska, and Colorado. It was certainly not a large event, but it was tremendously fun! We placed 2nd in the roasting competition, and I was blown away! It was the confirmation I needed to take our business to the next level. We began exploring areas to relocate to and start a coffee shop that could be our full-time business. We settled on the town of Sequim, Washington.

Sequim is a beautiful, small town located on the Olympic Peninsula in northwest Washington. It has a population of just over 7,000 people, and is nestled in the Dungeness Valley, between the Olympic mountains and the Strait of Juan de Fuca. It has a lovely, sunny climate, and the scenery is out of this world! Most importantly, it’s residents are coffee lovers! We scoped out this area and felt like there was an opportunity for us to open a café and roastery.

We signed our lease agreement, and on the way home, news of the Covid-19 pandemic started ratcheting up. Shortly after we got home, Washington state went on lockdown. As we were locked into our lease, we forged ahead, thinking surely it would all be over by the time we were ready to open. In July of 2020, we moved from South Dakota to Sequim. The construction had been moving forward during the lockdown, but there was still quite a bit of work to do. Three weeks after we moved, we opened our doors!

The pandemic was still very much impacting everybody’s daily life, business restrictions were in place, and it was a supremely challenging environment to open a new business in. The community of Sequim rallied around us, and we hung on!

Today, our shop is bustling with friendly faces, people coming and going, our coffee is stocked at several local grocers, and multiple businesses are serving our coffee. We are deeply thankful and appreciative of our community, and the help and support we have received from everyone over the last 18 months. We are looking forward to the future and are absolutely thrilled to be serving coffee in this beautiful town!